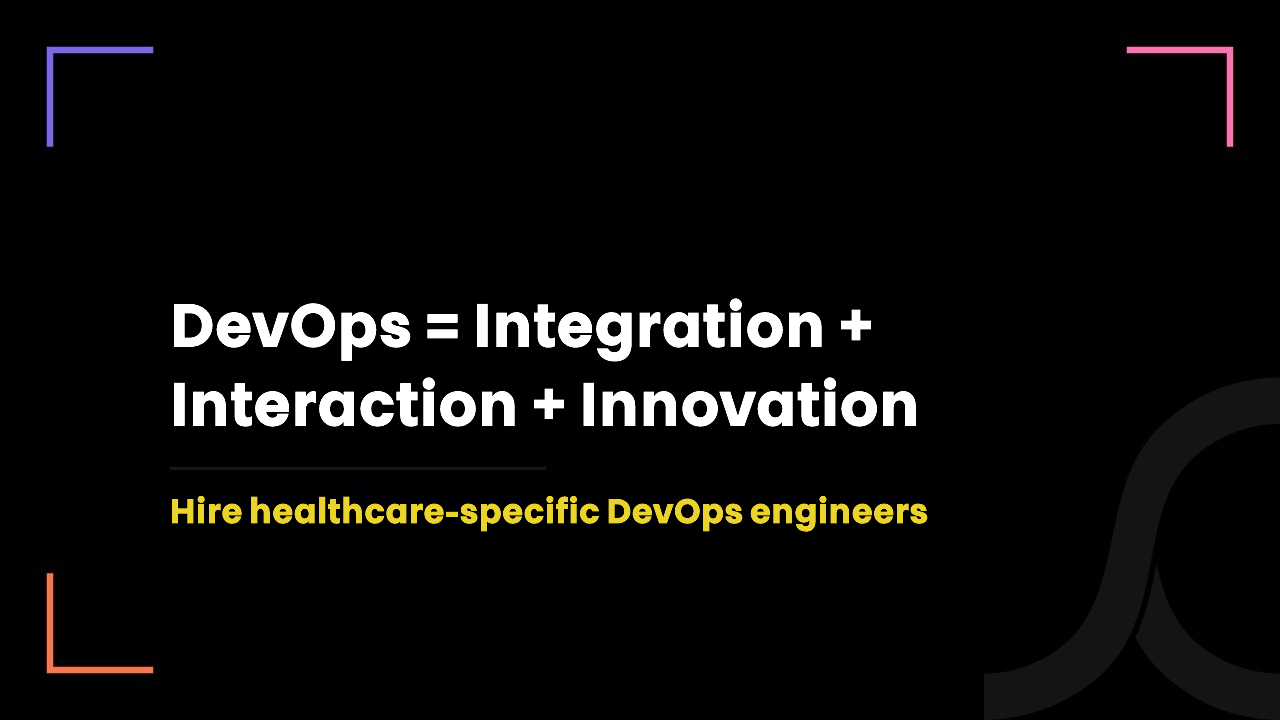 DevOps is what all IT companies and major brands are focused on.

Be it Amazon, Netflix, Target, Facebook, and Adobe, all these big players are leveraging DevOps for faster development of new products and easier maintenance for existing deployments.

Talking about the healthcare industry, DevOps can prove to be a game-changer as it has the capability to cope with ever-increasing healthcare software/app development complexities.

In simple terms, DevOps is the combination of culture, philosophy and tools to build, test and deliver IT solutions with high velocity. (It is not a programming language!)

DevOps brings both development and operational teams under the same roof and makes sure of continuous development, testing, deployment and monitoring, enabling teams to deliver products in record-breaking time while putting fewer efforts.

Because of continuous development, testing, deployment and monitoring, along with seamless collaboration and communication between development and operational teams, the highest level of adaptability, transparency and velocity can be achieved.

How to implement DevOps culture for your healthcare project?

The DevOps culture can be implemented in several phases with the help of multiple tools.

In this phase, the entire product roadmap and guide to future development are planned. It covers everything that needs to be addressed before jumping to coding.

Now, coding begins - while keeping deliverables in mind which have been fixed in the ‘Plan’ phase. During this phase, developers might work on new code or existing code while managing its code version.

This new code or changes in old code is stored in a repository with the help of a tool named Git. This entire process is called version control.

In this phase, the code is made executable. But for that, the entire process needs to be followed.

The developer uploads his code to a shared repository. Developer does this by submitting a pull request which is nothing but a request to merge his new code with the shared codebase.

Another developer either approves or declines the request after reviewing the changes the first developer has made in the code. This is a manual process which is supposed to be very quick.

At the same time, an automated process is triggered which runs the series of end-to-end tests on new code while considering old code and product functionalities to validate if new changes in code affect existing code or not. This is called regression testing.

In this phase, tools like Gradle or Maven are used.

Once the code is successfully built, it is time for testing. For that, the code is deployed in a testing environment where several manual and automated tests are performed including security and load tests.

After testing the code and making sure of no severe bugs, the code is released for deployment. Here, the operational team kicks in. The code can be deployed both manually or automatically.

At this stage, the code is live and being used by the customers in the form of new features. The operation team spends most of the time attending to the overall performance of the product or newly released feature.

This is the last phase of the DevOps cycle. Here, the team monitors the environment and collects data on feedback provided by the customers along with other data related to errors & performance.

If they find any issue, the report is submitted to the product manager and development team to fill the loopholes. Meaning, the planning phase triggers again!

Why should you hire DevOps engineers for your healthcare project?

Because of one single reason - DevOps engineers allow you to leverage the benefits of DevOps!

The following are the top benefits of DevOps (which can only be achieved via DevOps engineers).

How do our DevOps developers add value to your healthcare project?

We are an Ontario-based healthcare-focused IT company. Being healthcare-specific, we have been dealing with only healthcare IT projects for 7+ years now.

Our DevOps engineers have on-ground knowledge of the healthcare industry, compliance laws, workflows along with DevOps practice.

Because of their intense passion for the healthcare industry, we can add real value to your project.

Let us make it clear. These skills are mentioned by our clients who interact with our DevOps engineers on a daily basis.